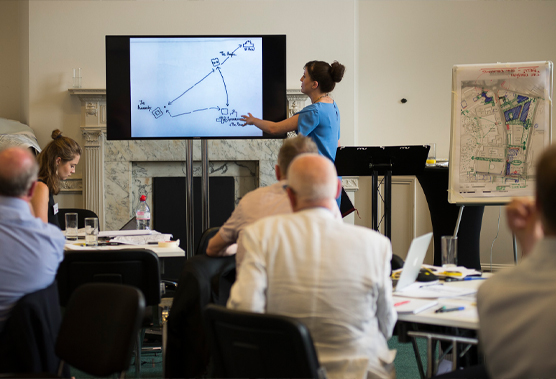 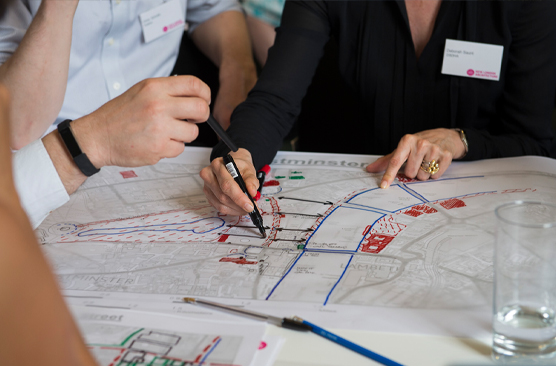 The ceremonial and constitutional heart of London, the area between Buckingham Palace, Parliament Square and Trafalgar Square contains the seat of government and the monarchy and accommodates the many ceremonies and public activities associated with each. A major attraction for visitors to London, its pavements are crowded but so too are its roads. Despite the volume of people there are few facilities, either for visitors or for the surprising number of people living and working in what they would rightly see as their neighbourhood. How can the public realm address the competing needs of the many communities in the area, one in which security will always be a critical issue?

To address these challenges New London Architecture (NLA) were commissioned to work in partnership with the Cabinet Office to develop a new vision for the public realm of Constitutional London, but to do so through a number of workshops to deliver an injection of expertise and creativity and to engage stakeholders in the process. New London Architecture appointed Design South East to plan, programme and facilitate the workshops.

We programmed the two days of workshops to include guided site visits, interaction with visitors and residents, group working and presentations to stakeholders. Separated by a week, the first workshop focussed on analysing and understanding the issues and the second on developing propositions for specific character areas which were then brought together in a single vision. The result was a vibrant, creative but coherent strategy for change.

Participants including representatives from key stakeholder groups – from Transport for London to the Royal Parks – contributed their expertise to the workshops, with a wider group of stakeholders joining for presentations at the end of the two sessions. The core of the process was a group of designers and built environment experts, who contributed their expertise and worked in groups to debate, discuss and develop the propositions and the overall strategy.

The design team at the heart of the process were: