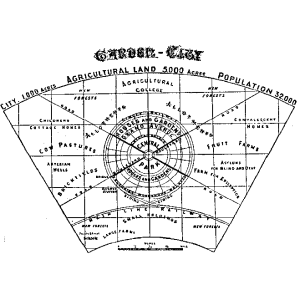 George Osborne’s announcement of a new garden city at Ebbsfleet was one of the more unusual features of the 2014 Budget Statement. An immediate accusation from opponents was that here was the cynical use of a nostalgic phrase to disguise old-fashioned urban sprawl, rather than a genuine attempt to develop new ways of place-making fit for the 21st century. Since then it has become clear that there really is political will to do things differently at Ebbsfleet. So how can we maximise this opportunity?

A new garden city is an unmissable chance to explore new ways of successful place-making: not just for the residents of the 15,000 new homes at Ebbsfleet but also for wider application around the UK in response to housing pressures. Ebenezer Howard’s original vision for garden cities was one of co-operative development, where cities were designed around the needs of those who lived there, and where residents had a real say in the communities taking shape around them. Here, therefore, is an opportunity to move away from top-down planning and towards a new model that engages and includes communities in the creation of distinctive and successful new places to live and work. While garden cities may only account for a small proportion of new housing, if managed well they can offer pathfinders for the UK’s wider housebuilding programme.

Design South East is the region’s leading source of built environment support for local authorities, the development sector and communities. Our Kent Design initiative brings the county’s decision-makers together with a wide range of public and private sector expertise to deliver high quality architecture, public space and infrastructure. We are therefore uniquely placed to not only shape the debate on how Ebbsfleet can become a successful model for a new generation of garden cities, but also deliver practical assistance on the ground to achieve this objective. Our recent conference at Ebbsfleet – The 21st Century Garden City – was an important event that produced several key recommendations for policy-makers and planners, and a series of clear messages emerged.

Place design at the heart of the planning process. Opposition to large new developments often arises because people have seen the aesthetic and social consequences of poor design elsewhere, and fear its arrival on their doorsteps. Ebbsfleet garden city is an opportunity to place design at the heart of the place-making process, delivering a place that is visually attractive, environmentally sustainable and economically viable. Design review is an established part of the planning system, and should certainly be used as Ebbsfleet garden city takes shape. By bringing planners and developers together through a positive conversation about how to make the most of new development, it is a critical element in ensuring successful place-making. Design South East’s regional design panel places national and international expertise in the hands of developers and local authorities, and has an unrivalled impressive track record in strengthening large-scale development proposals.

Engage with communities. Political leaders in Kent are clear that local people understand that Ebbsfleet garden city – if developed responsibly – offers improved services, facilities, infrastructure and jobs. However, that public support will only endure if the public are given a genuine say in what the new garden city will look and feel like. Ebbsfleet garden city is an unmissable chance to reject the take-it-or-leave-it approach of top-down planning, and engage communities in a genuine and positive conversation about how development can and should take place around them. At Design South East we have many years’ experience of brokering those valuable discussions between local authorities, developers and communities about development and growth. Those discussions simply have to take place at Ebbsfleet if it is going to enjoy public support and bring Howard’s vision of community stakeholders up to date.

Enable distinctiveness. Kent has a strong sense of identity and a rich architectural heritage, and a new garden city in the “garden of England” has to be seen as an opportunity to create somewhere with a strong sense of place. Earmarking land for self-builders would boost confidence in the self-build sector and create homes and neighbourhoods with distinct personalities. New approaches to housing One of the more thought-provoking suggestions at our conference was to allow a series of meanwhile uses on the site of the new garden city – encouraging entrepreneurs and creative people to work with local residents and businesses to develop temporary uses that could begin to shape a sense of identity on the site. Some may become permanent, contributing to what we hope will be a place with a rich tapestry of buildings, spaces and activities. Designing for spontaneity is one of the hardest tasks for planners, and here Ebbsfleet should be used as a place for experiment and playfulness.

The response to Britain’s housing crisis has to move on from the sterile debate about numbers. Ebbsfleet has offered the chance to shape discussion about what new settlements in the 21st century can offer communities and how they can respond to contemporary thinking about place-making. Design and communities must be central to the delivery of Ebbsfleet garden city if it is to be a successful and attractive new settlement that can point the way to addressing our housing needs.

This blog post has also appeared as an article for Placemaking Resource.

The 2019 Housing Design Awards are open for entries

Design South East are hiring for a Head of Programmes