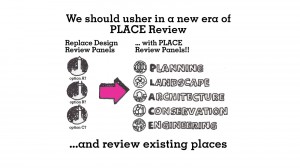 A half-day conference on the implementation of the Farrell Review on Thursday 5 February 2014 at New London Architecture, Store Street, London W1

The UK design community should ‘treat the place as the client’ if they want policies and funding to follow. So said Farrells partner Max Farrell at a half-day conference ‘Towards Place Review’ on 5 February 2014. The event was chaired by Design South East Director Chris Lamb and supported by Design South East as members of the Design Network.

The conference was kicked off by Sir Terry Farrell, who outlined the Farrell Review’s progress, two years on from architecture minister Ed Vaizey’s commissioning of the practice. Vaizey had said since the best way of progressing many of the report’s findings was to avoid going down the ‘cul de sac’ of government, said Farrell, and what the review represents is a movement rather than a report. ‘We tried to get more architects who aren’t at the top of haute couture, as it were, to do more for the everyday’ said Farrell. ‘We need to get every layer concentrated on the review of place, and improving place.’ Place review should look at existing hospitals, housing estates and roads, added Farrell, while design review at the moment is little more than an adjunct to planning applications, triggered when they are submitted. But Farrell said he had always been a believer in a more proactive way of making a place, envisaging the place as the client, and then writing a programme that no-one else asked the practice to do. ‘We have a system in this country that is purely and solely based on reactive planning’ Farrell added. ‘Planners are traffic wardens of the built environment.’

Sir Michael Lyons, author of the Lyons Housing Review, said that local authorities should be ‘place shapers’, but that this was only more likely if much more devolved local authority finance could be provided. But the provision of homes was at a crisis point, with the deficit likely to be as much as two million homes by 2020, and communities need to be given the tools to provide for their future, Lyons said, with infrastructure created first. ‘We are selling the youth of today a pup if we are leading them to believe that they should aspire to home ownership when in fact nothing could be further away from them, given the shortage of housing we are actually building.’

Design South East Director Chris Lamb gave a presentation on the work of Design South East, focusing on the design review work of the successful South and East Panel. Chris explained how the South and East Panel – which is expanding its activity into London alongside the South East and East of England – already offers an excellent model for design review and for the delivery of many of the Farrell Review’s objectives. You can view Chris Lamb’s presentation here.

The conference also heard from other speakers including Cllr Tony Newman, Leader of Croydon Borough Council, who agreed that the housing crisis is more urgent than many people realise and needs more devolution of spending to let local government keep receipts, along with an unblocking of land banks. ‘There’s an opportunity now to inform and influence policy that hasn’t been there for a generation.’ said Newman.

This is an edited version of an event report by David Taylor (Editor, New London Quarterly).

Delivering design quality in Kent and Medway – a one day workshop

Designing in Value in East Kent