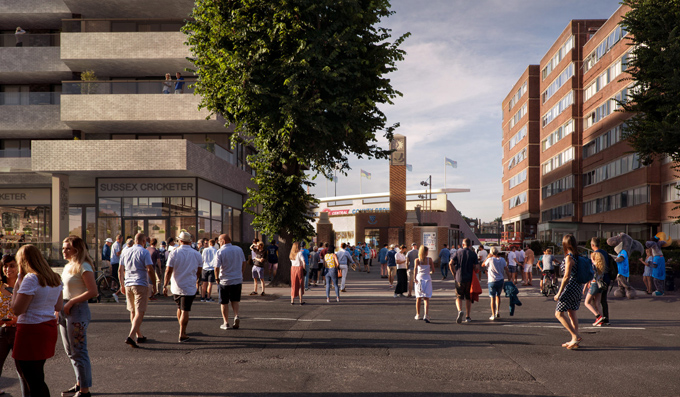 In 2019 Brighton and Hove City Council, began the planning process to reimagine the Sussex County Cricket Club. The redevelopment proposal captured the spirit and imagination of the design review panel, who viewed it as an opportunity to bring lasting and positive change for the local community, members, supporters, neighbours and the Club itself.

When approaching the process panel members drew inspiration for their advice from the heritage and values of the club.  Significant progress was made over the course of two design reviews, while at the same time, there were some lessons to learn for our practice as a panel.

The Sussex County Cricket Club is the oldest in the country. In the early nineteenth century, cricket was played south of Third and Fourth Avenues, adjacent to the Regency villas of the seafront. Today, at Eaton Road and in a more modestly sized and envisioned context, the ground is characterised by light-touch and temporary perimeter structures and activities. There are historic and contemporary details around the site that contribute to a sense of “Cricket”; notable among them are the green lawns, white picket fences, “greenery”, historic crests and gateposts. This sense of connection with the past and distinct identity were the positive qualities that the panel sought to maintain.

On identity and character, there was a proposal to demolish the Sussex Cricketer – an existing ramshackle standalone pub – and replacement with commercial space, we noted that local character would diminish. The team responded by finessing the proposal on Eaton Road, providing level access into key spaces, adding hedges, canopies and awnings. The historic Tate Gates were drawn into prominence and reunited with gateposts at the entrance. Liveliness was given back to the street.

In reviews, it is common to ask for a clear “narrative and vision”. It is worth noting that requesting a “vision” is an intangible, ethereal statement if not supported with practical advice. Such an approach relies on the sensibilities and aptitude of the team who are required to interpret our comments in the spirit we provide them.

In this case, we were more directive. We identified precisely the landscape, urban and architectural variations that were needed to contribute to the experience of using the ground in the way that represented a vision we conceived; a narrative with which the team agreed.

The housing proposal came to review as one of the higher quality proposals we have seen. However, the proposal took cues for its character from the adjacent conservation area, which we felt was not reflective of the grounds singular status in the city. On our recommendation of precedent studies of comparable architecture, the proposal was refined significantly. The team studied Embassy Court, adopting comparable asymmetry, continuous horizontal openings and super-white brick, becoming more conversant with the city’s unique architecture – even if copied a little bit.